This patriarch of Northern Minnesota pioneers was by common consent known as the "Father of St. Cloud," a designation to which he was justly entitled, as it was he who secured the land on which the city was originally located, platted it and built on it the first frame house, and this was his home continuously from the date of his settlement here in 1853 to the day of his death, January 3, 1910, when he lacked but a few weeks of rounding out full ninety years.

Mr. Wilson was of New England birth, his parents living at Columbia, Washington county, Maine, where he was born February 24, 1820. After one change of location in that state the family moved in 1830 to New Jersey, and a little later he went to New York city and secured employment in a printing office. During the ten years of his residence there he was engaged in various occupations, until in 1840 the family moved to what was then the new West, locating at St. Charles, Ill.

Mr. Wilson, an active young man, took up the business of contracting, giving especial attention to the building of saw mills and flouring mills. In 1851 he came to Minnesota and the following year erected a saw mill, as also a house, at Sauk Rapids; then completed a sawmill, which had been previously begun, at Little Falls, and afterwards built at St. Augusta Stearns county's first sawmill.

It was in 1853 that Mr. Wilson decided to locate at St. Cloud, purchasing a claim made by Ole Bergeson, a Norwegian squatter, platting the townsite, and giving it its present name. New settlers quickly came in and the embryo town grew in population and in importance. Mr. Wilson encouraged settlement by giving to those who first came lots on which to build. He was exceedingly liberal so long as the supply of lots held out, encouraging both public and private improvements.

Mr. Wilson held a number of offices, having been Judge of probate of Benton county in 1853; a member of the legislature in 1855, 1856 and 1857, while Minnesota was a territory, and again in 1870 after it had been admitted as a state of the Union. He was chairman of the board of county commissioners of Stearns county. When St. Cloud was incorporated as a town in 1856 he was the first president of the council, and served both as an alderman and as city justice. Mr. Wilson was married in May, 1847, to Cordelia Morgan, of Buffalo, N. Y., who died in Minnesota in November, 1852, leaving one son who died the following January. At Aurora, Ill., November 13, 1855, he married Mrs. Harriet N. Corbett, whose death occurred in this city November 6, 1897. Of the four children born to them but one, a daughter, Nettie E., survives him.

John L. Wilson was a born optimist. Everything looked good to him. He was always cheerful and hopeful, as happy when he had but a nickel in his pocket as when he had a roll of bank bills. He was open-hearted and generous, perhaps too much so for the good of himself and his family. Many men with his opportunities would have accumulated a  fortune, but during his last years he had to depend on others to show him some of that kindness he had so willingly shown to those who needed it during his years of prosperity. He was wholly free from malice and his motto was to do good rather than evil. For more than a year he had been in poor health and was at St. Raphael's hospital when his death occurred. The funeral was from his old home and was attended by representatives of the city government as well as by friends and citizens, the interment being at North Star Cemetery.

(from “History of Stearns County, Minnesota” by William Bell Mitchell, 1915)
Posted by Karen at 5:00 AM No comments: 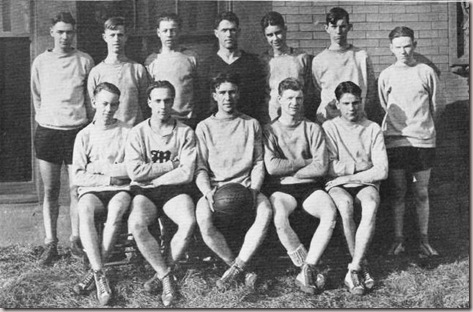 Manual High School, Peoria, Illinois
Posted by Karen at 5:00 AM No comments: