The Death of Thomas Colwell Jr.

Below is a copy of the letter written by Captain Sylvester Otman of Co E, 112th Regiment of the Illinois Volunteers during the Civil War.  It was penned on January 9, 1863 from Lexington, Kentucky, to Mrs. Mary R. Colwell, widow of Thomas Colwell Jr.  Colwell died from typhoid pneumonia.  This letter is to inform the young widow of her husband's death.  A transcription follows the images. 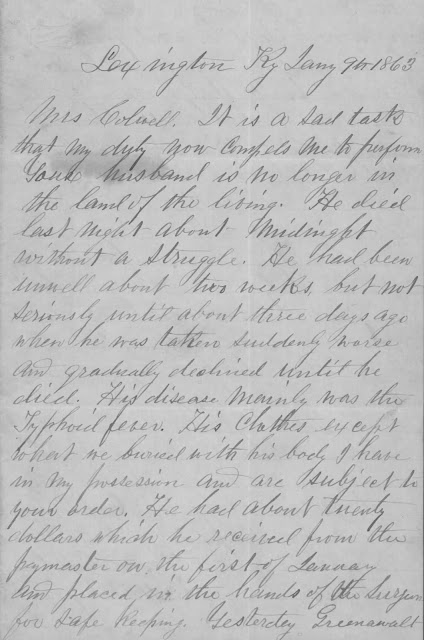 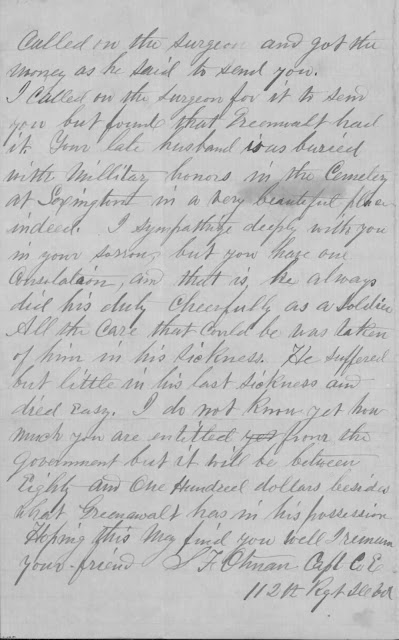 Lexington, Ky Jany 9th 1863
Mrs. Colwell:  It is a sad task that my duty now compels me to perform.  Your husband is no longer in the land of the living.  He died last night about midnight without a struggle.  He had been unwell about two weeks but not seriously until about three days ago when he was taken suddenly worse and gradually declined until he died.  His disease mainly was the typhoid fever.  His clothes except what we buried with his body I have in my possession and are subject to your order.  He had about twenty dollars which he received from the paymaster on the first of January but placed in the hands of the surgeon for safe keeping.  Yesterday Greenawalt called on the surgeon and got the money as he said to send you.  I called on the surgeon for it to send you but found that Greenwalt had it.  Your late husband was buried with military honors in the Cemetery at Lexington in a very beautiful place indeed.  I sympathize deeply with you in your sorrow, but you have one consolation, and that is, he always did his duty cheerfully as a soldier.  All the care that could be was taken of him in his sickness.  He suffered but little in his last sickness and died easy.  I do not know yet how much you are entitled from the government but it will be between eighty and one hundred dollars besides what Greenawalt has in his possession.  Hoping this may find you well I remain your friend,
S. F. Otman, Capt. Co. #
112th Reg. Ill. Vol.