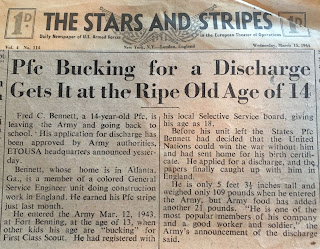 Fred C. Bennett, a 14-year-old Pfc, is leaving the Army and going back to school.  His application for discharge has been approved by Army authorities, ETOUSA headquarters announced yesterday.

Bennett, whose home is in Atlanta, Ga., is a member of a colored General Service Engineer unit doing construction work in England.  He earned his Pfc strip just last month.

He entered the Army Mar. 12, 1943, at Fort Benning, at the age of 13, when other kids his age are "bucking" for First Class Scout.  He had registered with his local Selective Service board, giving his age as 18.

Before his unit left the States Pfc Bennett had decided that the United Nations could win the war without him and had sent home for his birth certificate.  He applied for a discharge, and the papers finally caught up with him in England.

He is only 5 feet 3 1/2 inches tall and weighed only 109 pounds when he entered the Army, but Army food has added another 21 pounds.  "He is one of the most popular members of his company and a good worker and soldier," the Army's announcement of the discharge said.